The Hurdles: Female Sport Participation Within the Islamic Community 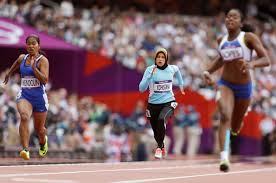 When asked about her participation in the 2012 London Olympic Games and the public reception from her home country of Afghanistan, Tahmina Kohistani responded, “They are not ready to accept me. They are thinking that I am wrong and I cannot do that because I am a Muslim and I am from Afghanistan and it’s not good for being a female athlete in my country” (Wise, 2012). The topic of gender continues to be one of the more discriminatory and polarizing issues in our world today, especially when it comes to the stereotypes and obstacles which surround physical activity, sport, and the expectations of women’s bodies and their physical appearances. Girls and women alike in the Islamic world continue to fight for the opportunity to play sport. Professional Muslim female athletes like Tahmina Kohistani continue to play in opposition to oppressive voices in the Islamic community. But aside from those discriminatory messages that individuals like Kohistani might receive, what other obstacles stand in the way of Muslim females that don’t stand in the public eye, yet still have a desire to play? As I will outline below, recent studies have shown that the lack of female sport participation within the Islamic community often occurs due to apprehension over appearance and dress, lack of approval or involvement of others, and technical/logistical issues within the framework of sport/physical activity programs.
Before I discuss some of the common barriers that exist for Muslim females who wish to participate in sport activities, it is important to take note of the Islamic feminist perspective towards gender equity. Early Islam acknowledged and encouraged the equal contributions of both men and women in the private and public sector, but centuries of globalization, migration, and conflict have caused the level of gender equity to vary throughout different Islamic communities (Jawad, 2011). Fortunately, the movement of Islamic feminism has opened the door for issues like gender equality and social justice to be discussed within the framework of the Islamic religion and interpretation of text. Dr. Haifaa Jawad (2009), a proponent of the Islamic feminist ideology, observes that while the Quran and the practice of Muhammad do not condone the disempowerment of Muslim women, this has unfortunately been a common social reality within the Islamic community. For Jawad and other supporters of Islamic female equality, the basic tenants and texts of the faith call “for the holistic development of human beings with attention to spirituality, as well as intellectual and physical well-being… both men and women are strongly encouraged to live healthily in body, mind and spirit” (2009, p. 32).

In her study of the British Muslim Women’s Football Team, Aisha Ahmad (2011) explored how members of the team had to constantly negotiate multiple aspects of their identities (e.g. gender, ethnicity, religion) as they attempted to find their voice and their place in society as Muslim female footballers. Ultimately, the BMWFT wrestled with common identity issues that female athletes in the Islamic community struggle with today, such as adhering to religious beliefs through dress like the hijab, as well as challenging traditional gender roles by participating in an often male-dominated sport. In order to encourage and empower Muslim girls and women to participate in sport, we must recognize that their identity is complex and may require simple compromise in terms of areas like dress codes. For example, only recently did FIFA finally lift their ban on turbans and hijabs for its players. While this ban may have initially been decided with safety in mind, it was a significant cause of tension for players who did not wish to choose between their love for their religion and their passion for the sport.

Not unlike other females around the world and outside of the Islamic community, Muslim women and girls have voiced their concerns about their appearance (aside from the hijab) during physical activity. Berger and Peerson (2009) investigated the relationship between physical activity and the social surroundings of young Muslim women in the United Arab Emirates. From the participatory action research, they were able to identify particular social obstacles, such as how “women usually abstained from any forms of exercise that might risk the appearance of ‘unfeminine pearls of sweat’ because ‘girls were meant to look clean’” (p. 122). Transcribed notes from a local ladies-only swimming pool made clear to Beerger and Peerson (2009) that some women did not participate because they did not want to wear the required attire (swimming cap and swimming costume), while others did not enter the water because they were overweight. The female participants admitted their negativity about exercise because “their grooming efforts might be ruined” and they prefer not to wear any sports attire underneath their dresses and head scarves (p. 121). Similarly, Kristin Walseth (2006) researched the relationship between young Muslim women’s identity work and their involvement in sport, and concluded that these women tend to be “confronted with an ideal of femininity that is not compatible with sport participation” (p. 84).

Aside from feeling apprehensive about their appearance or dress in relation to religious and ethnic identity, research has shown that the lack of female sport participation within the Islamic community may also be contributed to a lack of approval or involvement of others. Participants in Berger and Peerson’s study (2009) felt they lacked female role models among their friends and families. In their study of young Muslim girls, their teachers, and their parents, Dagkas, Benn, and Jawad (2011) found that there “are very few (Muslim women) role models in coaching or teaching” and “young people don’t have any Asian role models they can look up to who are ‘sports personalities’” (p. 231). One teacher was even quoted as saying, “Many families and parents do not value sport as an important part of their child’s education, they do not encourage it…It is important to change the views of parents and to get them more involved in their children’s education” (Dagkas, et. al., 2009, p. 234). Furthermore, Arar & Rigbi (2009) looked at the Muslim Arab-Israeli community and investigated youth participation and perception regarding physical education. They concluded that female participation was related to a family that encouraged engaging in physical activity, as well as PE teachers who exhibit devotion and professionalism towards the subject (Arar & Rigbi, 2009). It is important that young girls in the Islamic community have the encouragement of their peers, their family and their teachers in order to view sport as an acceptable, healthy, and enjoyable social activity.

While there must be more of a concerted effort to be aware of particular social, cultural and emotional hurdles as discussed above, we must also acknowledge potential problems that exist within the logistics of the programs themselves. Female sport participation within Islamic communities may also be affected by these kinds of barriers. The Women’s Sport and Fitness Foundation (2010), along with Sporting Equals, explored some common reasons as to why Muslim women choose not to play. Some of these obstacles are related to logistical and area set-up issues, such as:

It is critical that sport organizations and programs recognize the potential faults and gaps within their own program frameworks in order to better meet the needs of the Muslim female community. On the bright side, it is clear that some girls do in fact want to play. Lee Mitchell wrote a brief article in The National (2010) about what it is like to coach the sport of football to girls in a Muslim country. He emphasizes that even though the girls were novices with no previous training, they were very clearly enthusiastic about the game and ready to learn. Mitchell (2010) notes, “They really enjoy playing and that is a positive thing. For many of the girls who I worked with in the United States, it was more of a means to an end. It was a full college scholarship, which is what they were playing for more than, sometimes, the fun of the game.” As these obstacles to female sport participation in the Islamic community are acknowledged and overcome, one would hope that other related issues are resolved as well. Six Middle-Eastern countries are among the top 10 in the world with the highest prevalence of diabetes (Hamdan, 2011). Health and nutritional awareness is not very high, as a study performed in the UAE during 2009/2010 (Ng, et. al., 2011) showed that 65% of adult women, 40% of female adolescents, and 41% of female children were overweight or obese. While sport has the ability to be a fantastic avenue towards overall health, well-being, and cultural and social acceptance, participation is not always a foregone conclusion. Muslim women who wish to play face certain social and external barriers, all while negotiating complex gender, religious and ethnic identities. It appears that awareness of players’ identities and flexibility within sport program frameworks is a step in the right direction for increasing female participation in the Islamic community.

Arar, K., & Rigbi, A. (2009). ‘To participate or not to participate?’—status and perception of physical education among Muslim Arab-Israeli secondary school pupils. Sport, Education and Society, 183-202.

Jawad, H. (2009). Islamic Feminism: Leadership Roles and Public Representation. Journal of Women of the Middle East and the Islamic World, 7, 1-24.

Mitchell, L. (2010, January 16). What is it like… to coach football to girls in a Muslim country. Retrieved January 16, 2015, from http://www.thenational.ae/sport/b-what-is-it-like-b-to-coach-football-to-girls-in-a-muslim-country