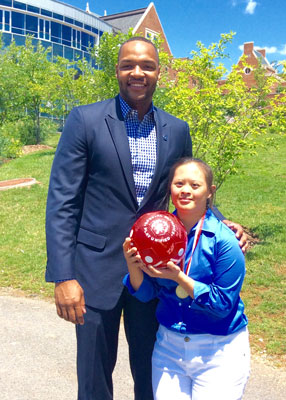 O Street International is proud to present this article, written by board president, Omari Faulkner, which appeared October 23, 2015, at Special Olympics USA

Once an athlete, you’re always an athlete. You never lose the drive and determination it takes to compete, or the fortitude to lose and show up the next day to try again, and you recognize these traits when you see them in other people.

You can see it in Alicia Gogue. She’s been competing in Special Olympics and expanding her sports acumen, mostly as a cyclist but also in golf, swimming, skiing, rollerblading, karate and horseback riding.

I met Alicia and her father, Alex Gogue, when they came to Georgetown University in June (2015). She was the guest speaker at a Sports Industry Management Institute meeting of 148 students. I am much removed from my glory days, when time never stood still and burning thousands of calories during hours of intense basketball practice was just another day at the office. But I saw in Alicia the attitude it takes to be a winner: In her words, “No matter what it takes and how long it takes.”

Alicia, 31, spoke before heading to the 2015 Special Olympics World Games in Los Angeles. She first got involved with sports at age 12, and recalled that “I was very proud of myself” after winning her first medals. She continued to compete, adding events and specialties along the way, and says now that “participating in all different sports made me strong, confident, disciplined and developed physically.” When I asked how she could fit in so many different sports, as well as working in child care development, she simply replied, “I tell myself if one can do it, so can I. … I believe that I am capable of reaching countless and limitless opportunities.” Alicia’s most proud when she has the opportunity to demonstrate that she can achieve various sporting milestones. Her technique is simple: “I start off slowly and gradually build up to the level required by the sports event which I compete in.”

Another thing every athlete knows is that you can’t do it alone. Although we are determined and at times relentless, frequently it’s those who push us to greatness, who see our potential and shape it, who are the real heroes. They endure the pain and the struggles just as we do; they face down the outsiders who put limits on our physical and mental abilities; they are responsible for so much of the end product. Our coaches, supporters, parents — those who inspire us to feel unstoppable — are the root of greatness.

Alicia knows this too. Her family, she says, “promote morale and self-esteem. My parents constantly remind me that I can do it! Like my grandmother told me: ‘nothing easy, nothing hard; just do it.’”

Alex Gogue shines as he recounts bringing up his daughter. Asked whether being father to an athlete with Down Syndrome brought any special fears, he said, “I never feared anything with Alicia. … We accentuate or instill the positive and distill or dispel the negativity.” He added, “Everyone, believe it or not, has some sort of disability. Some people are good at playing a sport, and some may have difficulties.”

Every athlete has people in their own corner, but every Special Olympics competitor owes a debt to Eunice Kennedy Shriver, the younger sister of President John F. Kennedy. Shriver saw in the early 1960s the need for summer camp offerings for children with intellectual disabilities. There was no foundation in place to offer such a sporting experience, but with the same kind of determination and support that great athletes need, she started the process to create what is now known across the globe as Special Olympics.

Alicia Gogue’s testimony that morning inspired us all. I will never forget her words, or the feeling of appreciation her father exuded in knowing that she had an outlet to express herself and change lives. What I took from Alicia’s story more than anything is that as athletes we often strive for greatness due to those who believe in our abilities, yet their rewards come only through our successes.

There’s another, less pleasant part of being an athlete that we have to get used to: falling short. Alicia won silver medals in the 1,000- and 2,000-meter cycling races at the Los Angeles Special Olympics, but as her father points out, it could have been more: She was disqualified from the 500-meter race, along with several other riders, in the wake of a technical problem and confusion over the location of the finish line.

But the important thing is to remember what you can and can’t control. And in a situation like that, the only thing you can control is your will to get back out there and keep working. Alicia knows this too: “It isn’t all about winning the gold,” she told me; “the ultimate prize is trying, preparation and giving it your best – giving it your all.”